Woke up around 9:30AM that morning…couldn’t bring myself to waking up much earlier than that since we didn’t get to bed until about 3AM the night before due to the long drive from California Gulch to Madera Canyon. I quickly packed up my gear and headed down the road to Proctor Road before it got any later…or hotter. I met up with a couple of other people who informed me there was a Black-throated Sparrow nest within one of the Cholla Cacti along the trail.

Since I didn’t see either of the parents around, I peeked in the nest and was delighted to find 3 recently hatched chicks and an egg still not hatched. I snuck some video of the nest with my iPhone careful not to disturb the surroundings…especially considering the fact I’d have a hand full of pokers if I got too close! Although you can see one of the chicks jump up with it’s mouth open toward the end of the video as it must have heard me thinking I was it’s mother returning with food.

I decided to head up the trail a bit more and check the nest on the way back. There were lots of Hepatic Tanagers, Blue Grosbeaks, Indigo and Varied Buntings all along the creek. Never found the Black-capped Gnatcatchers that have been hanging out there.

On the way out I was happy to see the female Black-throated Sparrow was on the nest and just a few feet away the male perched on a branch holding a grub for one of the chicks. 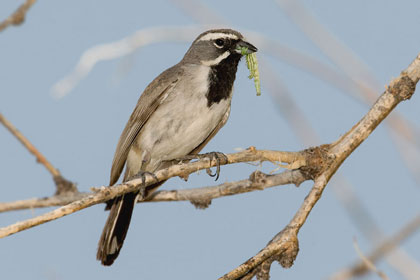 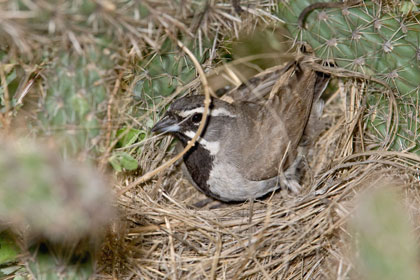 I didn’t have much more time that afternoon since I had to get back into Tucson to catch my flight back home. I made a quick stop at the Madera Kubo lodge and got some photos of the Hooded Oriole nest above the road. The juveniles were very close to fledging and as you can see from the second photo, the young Hooded Oriole almost flew out of the nest! 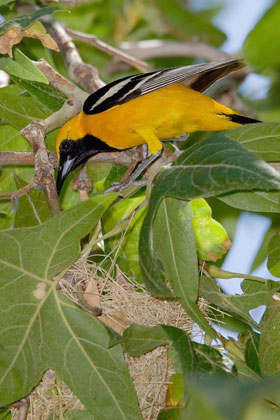 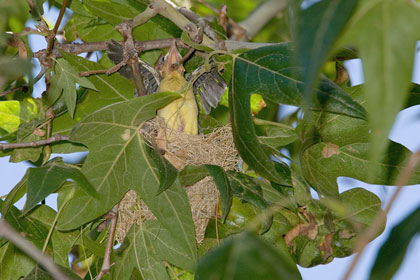 I’ve been to SE Arizona over 30 times so far and it never grows dull. I had a great time despite getting over 50 chigger bites and 15+ mosquito bites but it was quite worth it. I’m already planning my next visit. 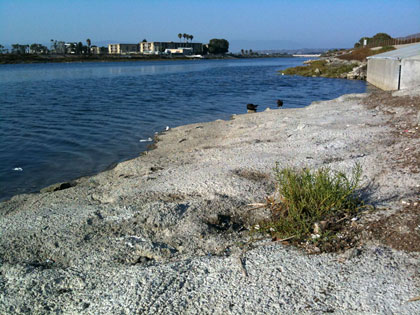 I took a stroll up Ballona Cr. yesterday afternoon to look for any migrating Red Knots… Didn’t find any but saw a couple Semipalmated Plovers which I see very irregularly along the Creek. As I was coming to the second locked gate on the south end of the Creek I noticed a Western Grebe that was propped against a rock… I expected it to flush back into the water as I approached it but it didn’t move at all. 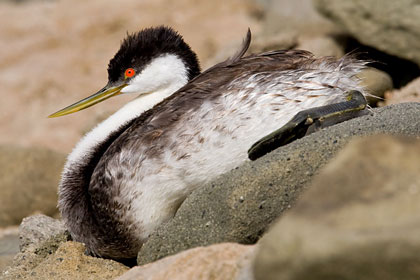 It just watched me cautiously as I drew closer and closer. I realized it must be injured or sick so I decided to take a few photos and call Roy Van de Hoek with the Ballona Institute to see if he could come take the bird to a rehab facility. He recommended I phone the IBRRC bird rescue in San Pedro. I did so and only received a recording so I left a message. I decided to continue down the creek so I didn’t waste all the time in my 2 hour parking meter.

About 30 minutes later the IBRRC called me back and said that they were not able to come take the bird so they recommended I try to get it into a box myself and deliver it to the West LA animal shelter in the morning so that they could deliver it to them in San Pedro. Since I did not have a box or blanket to throw over the bird with me I phoned a friend who was able to bring me the items necessary to capture the Grebe.

While I waited for her, a curious Heermann’s Gull came close to see what was going on… 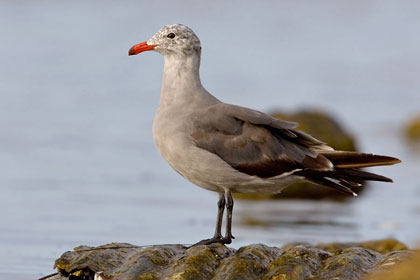 When my friend arrived with the blanket, I was able to easily toss it over the bird to pick it up gently and place it in the box. It certainly wasn’t happy about the situation but it seemed to have lots of energy, despite it looking under nourished, which was promising. Now the difficult part was figuring out how to keep it safe/warm at my house overnight! 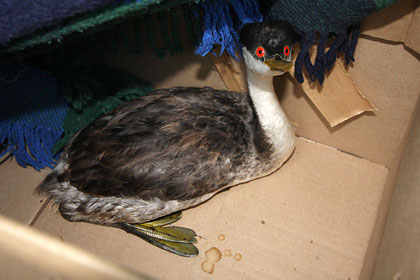 Roy recommended I try to get it over to Peter Wallerstein with the Marine Animal Rescue group in Playa del Rey. I was finally able to get ahold of him that evening and delivered the bird safely to him. He said the keel bone was sticking out so it hadn’t eaten in sometime but otherwise the bird felt and acted in good health. He told me the shorebird rehab clinic would pick up the bird in the morning so hopefully the little guy pulls through!

Oh and before I forget, the male Hooded Oriole has been visiting the feeder in my backyard regularly for the past week now. When I got home from Ballona I heard him calling across the street as soon as I opened my door. It appeared the male and female were either building a nest or already had one in the fan palms in my neighbor’s yard. Note, this was the same yard a pair (same pair?) nested in last year but their nest was cut down by the gardener… Hopefully the same outcome does not result again this year. Here’s the video I took of the male Hooded Oriole visiting my feeder this afternoon.

And I leave you all with a photo of my new Owling flashlight for Arizona this weekend! 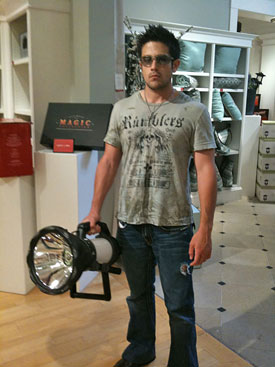 (Just kidding – I didn’t actually buy it, although I was tempted!)

Posted by ctaylor on July 28, 2009 in Photography Adventures 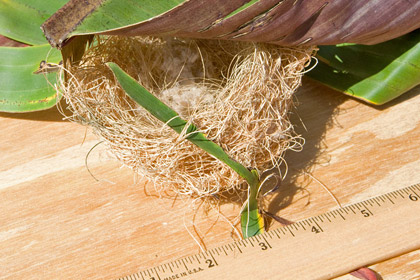 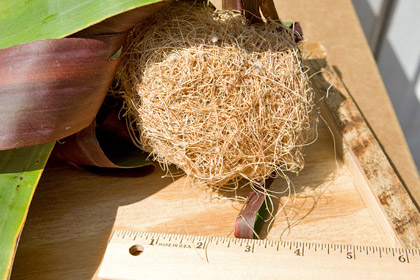 Kept it local this week by checking out Piute Ponds (on Edwards AFB) and Lancaster Sewage Ponds in the Antelope Valley on Saturday. Sunday I birded Talbert Marsh and Bolsa Chica in Orange County. Main target birds were: Semipalmated Sandpiper, Baird’s Sandpiper, Common Tern, Gull-billed Tern and any other early fall migrant surprises. I didn’t find any of them…. Here are some highlight photos I took though: 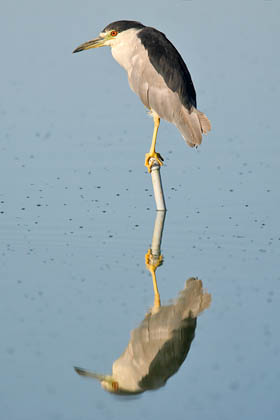 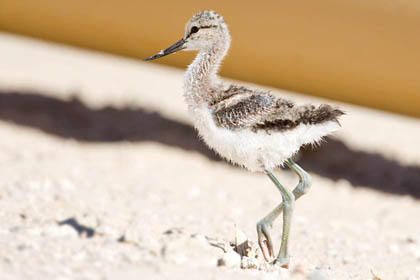 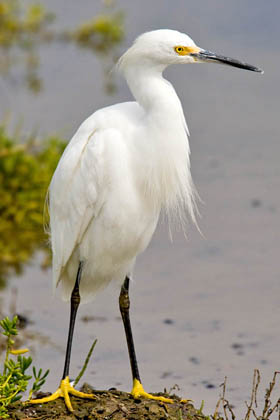 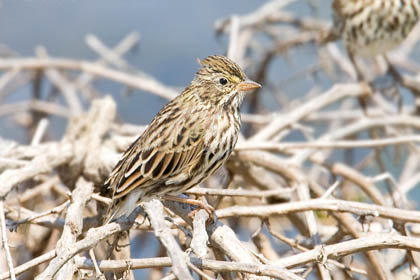 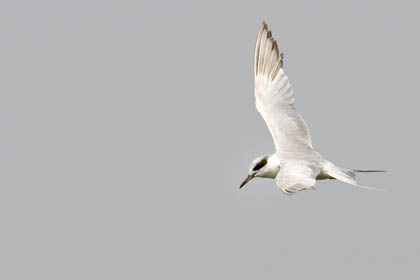 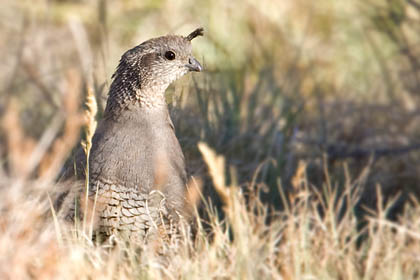 Here are a couple backyard shots taken earlier this week: 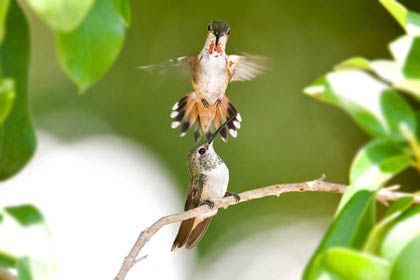 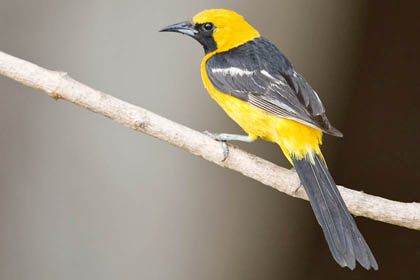 Posted by ctaylor on August 4, 2008 in Photography Adventures