Amidst some serious Cumulonimbus Calvus formations we bounced around into Tucson International. Baggage came out quickly, got our rental and hit the road on our three hour drive to Portal, AZ. Arrived just before midnight, tried playing the Elf Owl call to no avail and gave up after 10 minutes to get some much needed sleep.

Woke up the next morning at 5AM and began heading up the Chiricahua’s. First stop was Herb Martyr Campground where we hiked up to Ash Spring. Had fleeting glimpses of Virginia’s Warbler, Dusky-capped Flycatcher and various other birds but no solid photos. Back to the car and continued on toward Rustler and Barfoot Campgrounds. Pretty dead morning. About the only thing we encountered along the way were a pair of Scott’s Orioles, lots of Dark-eyed Juncos and TWO Mexican Chickadee’s: 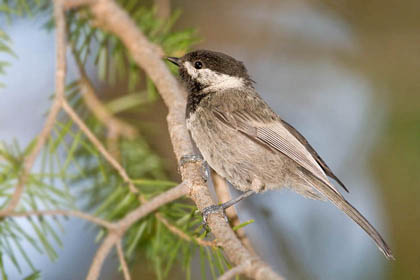 Also scoured the seasonal firefighter village nearby but only found 8-10 Cordilleran Flycatcher’s still feeding their young that had fledged some weeks prior. 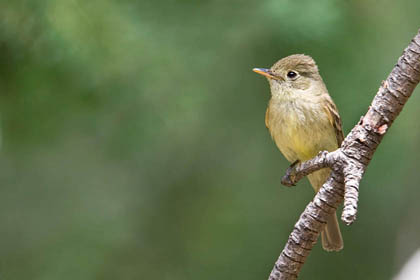 That was just about all we saw in the Chiricahua’s that day, save for a Mule Deer. Nary a Red-faced Warbler, Grace’s Warbler, Olive Warbler, Greater Pewee, Buff-breasted Flycatcher, etc etc etc. Seeing some ominous cloud formations approaching we made the wise decision and headed down the mountain toward Willcox. No more than 15 miles down the road did the downpour start – a much needed shower for our muddy 4×4 Hyundai Tucson rental!!

Cruised into Willcox just as the rains had subsided and stopped at the Willcox Playa to find a solitary Wilson’s Phalarope on it’s southerly journey, ultimately toward the southern hemispherical Patagonia of South America. 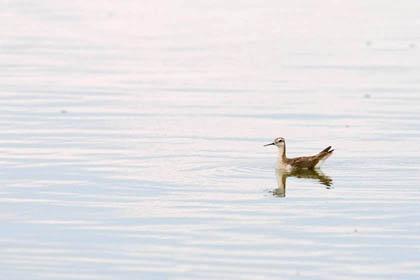 Since there wasn’t much daylight left I figured we could make it to Madera Canyon just in time for some nice late afternoon rays (pending it wasn’t pouring rain!). Fortunately the horizon was clear and the sun was finally breaking free from the clouds that had engulfed the skies of SE Arizona over the past few weeks.

The next step was to find a good photo subject! Hiked along Proctor Road trying to kick up a Varied Bunting or two. Heard them calling in the distance but too shy to come out in the open. Their distant relative, the Blue Grosbeak, did show itself however: 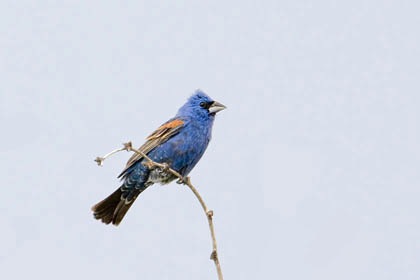 That was about all we had time for that afternoon. We headed back into Green Valley to have dinner at our usual Mexican place and then back up the Canyon to Madera Kubo. Was hoping to get in some owling or nightjar hunting but was just too tired!

Sunday begins at 5AM to a Hepatic Tanager calling outside our window. Why did I even bother setting the alarm? Since it was much too dark in the Canyon I decided to check out Proctor Road. Was pretty overcast and it didn’t look very promising that we’d dodge the rains this time. Lots of Varied Buntings calling so I used some guerilla tactics by sneaking into some brush and luring them toward me with my iPod! 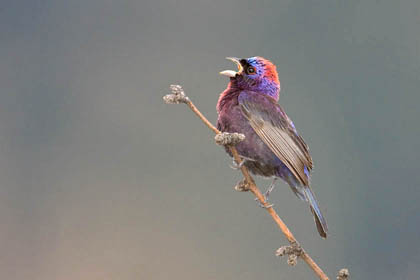 Just beyond the Varied Bunting I managed to dig up a Black-throated Sparrow. 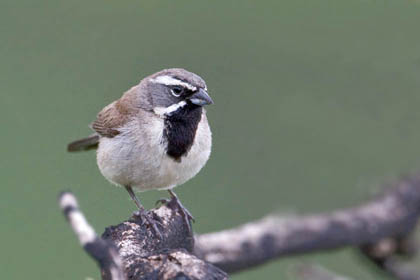 I spoke with another couple from Miami, Florida who informed me he had just photographed an Elegant Trogon pair tending their nest along Vault Mine Trail the previous morning. I decided to chance the weather and hiked 3 miles up Vault Mine and finally located the nest. Unfortunately there was not a Trogon to be seen (or heard)! Went up the trail a bit more and was able to lure a Dusky-capped Flycatcher reasonably close: 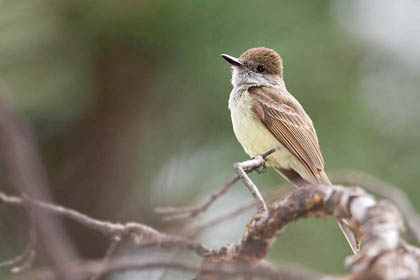 Not much else that day. It rained off and on up the trail but nothing serious. We decided we better head back to the car and decide what to do from there. By the time we go to the car you could definitely tell it was about to downpour. Lightning and thunder intervals were getting closer and the temperature was dropping considerably.

I decided to head toward Patagonia to try our luck there. Half-way between Green Valley and Nogales I phoned a fellow birder who had been in Madera Canyon that morning. He informed me that he was pulled over on the side of the road, just below Madera Canyon, waiting for the torrential downpour to subside! US-2, Monsoons-0.

Did a quick loop around Keno Springs Golf Course in search of Gray Hawk – no luck. Continued into Patagonia and out Harshaw Creek Rd. toward the San Rafael grasslands. Again no luck, and by the time we got out to the prairie it started to rain a bit. Turned around toward Patagonia and rained quite a bit on the way back. Fortunately all the washes we had crossed over were still relatively passable.

On to the Paton’s House. Just as we pulled up it really started pouring, and I mean pouring. Sara quickly informed me that we better head back to town since we didn’t want to be trapped on this side of Sonoita Creek. Crossed back into town just fine and waited the storm out. It started to slow down a bit after 20 or 25 minutes so we headed back to the Paton’s to see if the Sonoita Creek was still passable. Much to our surprise, the water level had barely risen. We easily crossed over in our SUV. Parked our car, threw on our rain gear and headed to their backyard and under the protection of the tent they had appropriately erected in the middle of the yard. Didn’t matter much anyway as the rain had slowed down to just a sprinkle the rest of time there.

Within seconds the Violet-crowned Hummingbird flew in. Not much of a chance for photos as it was pretty dark. Gila Woodpecker, White-winged Doves, Bronzed Cowbirds, Scaled Quail, etc. all flew in to the feeders. I didn’t get any better photos than I already had before so I won’t be posting anything here. Decided to head out and try one last time for the Gray Hawk on our way back to Tucson.

Unfortunately, Sonoita Creek was not the same level anymore… It was probably a 6′ or 7′ deep roaring river – despite it not raining for at least an hour… We sat there for about 5 minutes when a local pulled up and told us to follow her. We took some backroads and managed to cross a section of the Creek that was bone-dry! We thanked her and continued on our way.

Barreling down Patagonia Hwy, I noticed a Buteo shaped bird perched on a utility pole. I slammed on the brakes, flipped around and slowly crept up to find a Gray Hawk! 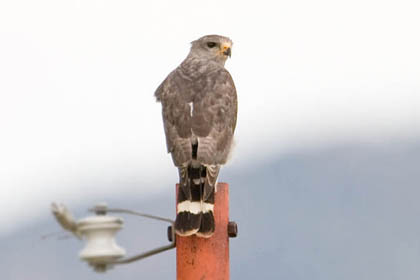 It obviously didn’t care for our presence and quickly flew off north. Next road that turned north was River Rd. so we decided to try our luck and try to refind her. Just about 4 or 5 mi. down the road and at the point of giving up to turn around I spotted a raptor sitting on a telephone pole up ahead. Sure enough, it was another Gray Hawk. This time I was able to get a few more shots off as she flew from pole to pole. 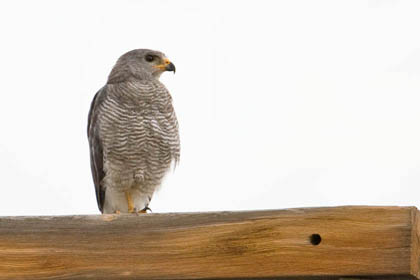 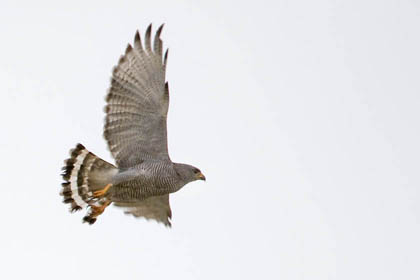 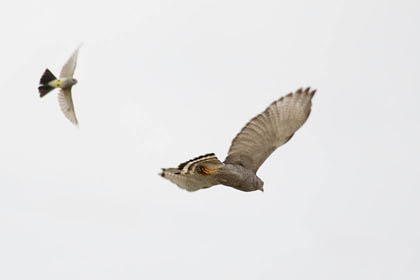 This just about concludes our SE Arizona trip. Not as productive as I had hoped but we were fortunate enough to dodge most of the Monsoonal rains. My biggest target was probably the Gray Hawk and I was finally able to get some semi-decent shots. Some of the big targets I missed: Olive Warbler, Greater Pewee, Tropical Kingbird, Grace’s Warbler, Virginia’s Warbler and better shots of Red-faced Warbler, Sulphur-bellied Flycatcher and Elegant Trogon.

On a concluding note, I always dread the Border Patrol stop on the way between Nogales to Tucson as I’m always waiting for them to say “Please pull your car off to the side so we can go through all your camera equipment in the search of contraband and accidentally drop and break a few of your lenses.” This time the stop was closed and lined up on the side of the road were 6 or 7 handcuffed Mexicans waiting to be deported back to Mexico. In a way, all of us didn’t get everything we were looking for in SE Arizona. I guess it gives us all a reason to try it again next time!

Posted by ctaylor on July 21, 2008 in Photography Adventures