After an interesting night at Motel 6 in Nogales, AZ we got off to an early start heading west along Ruby Rd. toward Sycamore Canyon and California Gulch. 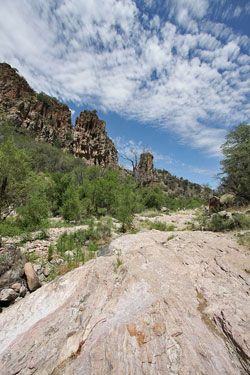 As soon as we pulled into the Sycamore Canyon trailhead parking lot we heard a Thick-billed Kingbird calling from the top of one of the trees. We found it within a few moments as an Acorn Woodpecker was trying to chase it away from it’s perch. 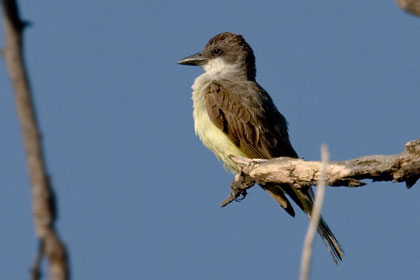 Bell’s Vireos were calling everywhere around us and I finally got some decent shots of them! An Eastern Bluebird pair also made a nest out of an abandoned hole in one of the Sycamore trees just above the parking lot. The male and female were actively catching insects and taking them back to their nest. 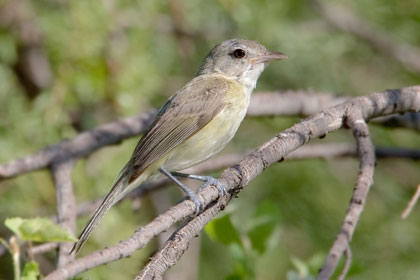 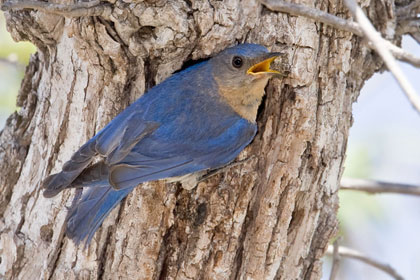 We pretty much could have just stayed in the parking lot all day without getting bored with as much activity going on all around us. But we decided we better start hiking up the canyon before the mid-day heat became any more unbearable. We took care not to brush up against all of the Poison Ivy growing all along the creek. 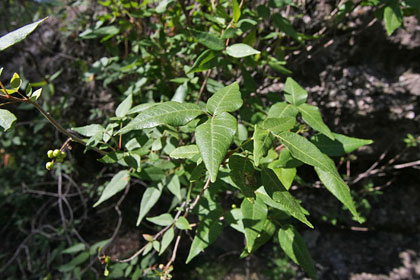 Not even 75 yards down the trail, my friend yelled at me to not take another step and quickly grabbed my arm. As soon as she did, I heard the all to familiar sound of a Rattlesnake just a few feet away. I’m not sure how I didn’t hear it but I’m truly grateful for my friend’s quick reaction time in stopping me! I breathed a sigh of relief and realized this was a great opportunity to take video of the Rattlesnake!

Although the creek was relatively dry within the first half-mile that quickly changed farther down the Canyon. Pockets of water provided a home for the native fish, Sonoran Mud Turtles, Leopard Frogs and many different species of Dragonflies and Butterflies. 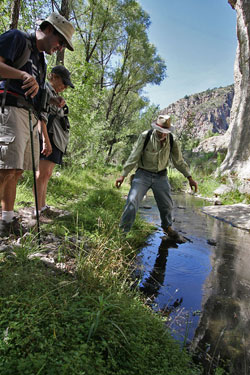 Since there wasn’t much bird activity I took the opportunity to photograph our other winged friends that seemed to be begging for our attention. 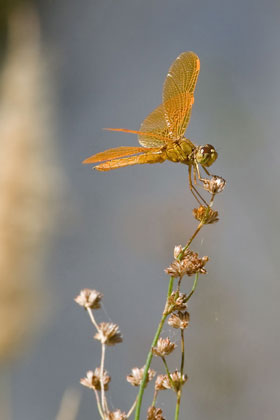 One of the larger ponds held lots of native fish that I’m still trying to identify. While I was watching the fish swim about I took notice to a Sonoran Mud Turtle along the edge of the pond. 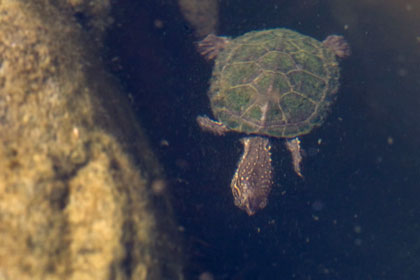 Nick caught a Black-necked Garter Snake a little way down the trail and brought it back for all of us to look at and photograph. Not much later he came back with a gravid female Lesser Earless Lizard! 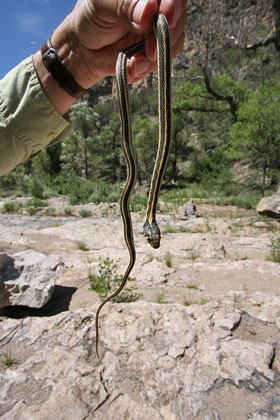 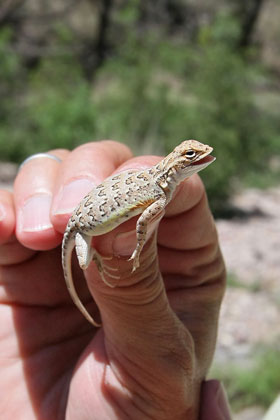 After a quick little break of playing with dragonflies and reptiles we hiked up the Canyon a bit more where we heard a Northern Pygmy-owl calling. It didn’t take very long for me to find him as he had lots of Bewick’s Wrens mobbing him certainly not appreciating him being so close to their nests. We all got spectacular views and I took one of my favorite photos from the weekend. 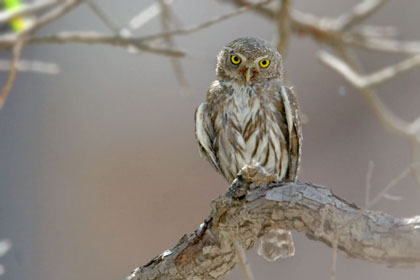 It was a beautiful day to be in Sycamore Canyon. Not a drop of rain and reasonable temperatures despite it being the middle of summer. 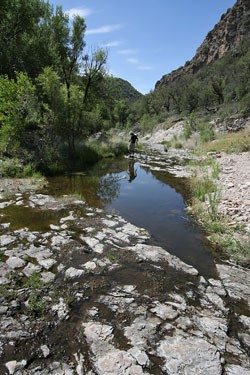 Since it was the middle of the day, we took a quick break back at the parking lot to eat lunch and I even fell asleep in my chair while I was waiting for the Eastern Bluebirds to return to their nest! It was close to 2PM before we decided to pack up and head over to California Gulch. 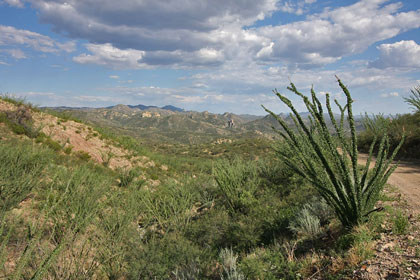 We took the long way around through Warsaw Canyon and Clayton Canyon. We were treated to a few Montezuma Quail with a juvenile along the way. While we were photographing and enjoying the scenery a US Customs and Border Protection helicopter circled around us for a few minutes. Clearly they were running all the license plates of our vehicles and to make sure we weren’t hustling drugs or illegal immigrants across the border. It was the first time I’ve ever seen a helicopter in that area let alone one that took such keen interest to what we were doing. 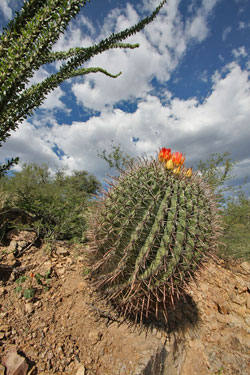 We drove past the southern entrance to California Gulch and I immediately noticed two individuals walking rapidly into the Gulch. I tried to grab my camera to get a photo and so I could get a closer look but they quickly disappeared around the mountain… There were no vehicles in sight and we never did see the two people again. Most likely they were Mexican immigrants trying to get into the U.S. but we’ll never know for sure.

We continued on our way to the north parking lot where everyone typically enters the Gulch. Just as we were pulling into the parking lot we spotted a male Lesser Earless Lizard sunbathing on one of the rocks. 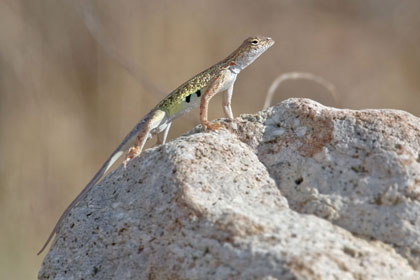 Due to the steep mountains surrounding the Gulch, the sun was just going down as we hiked to the bottom so it did not provide the lighting conditions I had hoped for. Five-striped Sparrows were singing all around us and it didn’t take long to spot one up on the hillside. 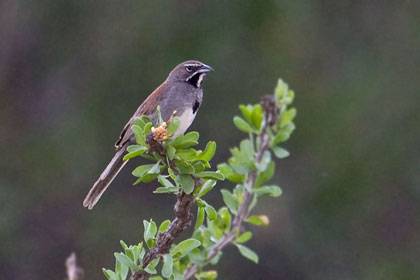 Also in the area were many Varied Bunting families of males, females and juveniles. We also had a Yellow-billed Cuckoo on the way back to the cars. I took a couple of photos at very distant range but nothing noteworthy enough to post here. We then headed about .2 down the road to the Oro Blanco Mine where the infamous Buff-collared Nightjar returns every summer. We met up with Melody Kehl and her tour group and thankfully we did as it provided many more eyes and ears to hopefully locate the Nightjar. With just a little bit of remaining light in the sky someone shouted out they heard the Nightjar. We all rushed over just quick enough to see it fly off into the wash. We tracked it down for a bit and got a couple of fleeting glimpses of it flying away as we followed it’s call. Unfortunately there were zero photo ops so I came back without any photos. 🙁

Feeling a bit defeated we headed back into town. About 40 miles outside of Nogales, along Ruby Road, we saw a HUGE Black-tailed Rattlesnake just spread across the middle of the road. At first I thought it had been run over but as soon as we all jumped out of the car it started moving off the road perfectly fine. I didn’t get any photos since my camera was already packed away so I grabbed my iPhone to take video.