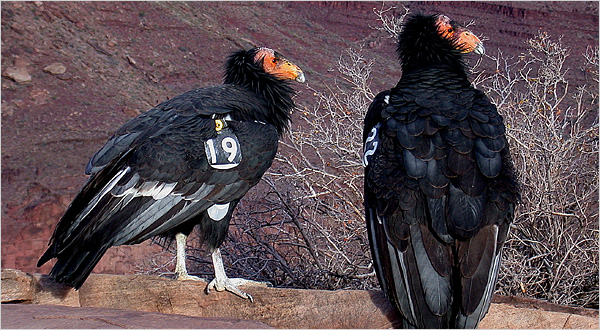 Recent eggshell fragments retrieved from reintroduced California Condors have appeared abnormally thin – according to senior wildlife bioligist, Joe Burnett with the Ventana Wildlife Society. The discovery raised a disturbing question: whether or not DDT – the deadly pesticide that has been banned in the United States since 1972 – could produce reproductive problems in Condors nearly four decades later.

Ventana biologists have been comparing the thickness of the eggshells recovered from the Big Sur birds with those produced by the Southern California condor flock that lives many miles from the coast. The Southern California birds do not feed on marine mammals, and their eggs are normal. Mr. Burnett says that preliminary results from Ventana’s study suggest that the Big Sur eggs are “substantially thinner” than those from the inland birds, and that early indicators point to DDT as the principal cause of the thinning.

The DDT that pollutes the Palos Verdes Shelf originated half a century ago with the Montrose Chemical Corporation. At the time, Montrose was the world’s largest producer of what was once hailed as a “miracle pesticide.” According to Carmen White, the Environmental Protection Agency’s remedial project manager for the site, in the 1950s and ’60s Montrose discharged its untreated DDT waste directly into the Los Angeles County Sanitation District’s sewer system. An estimated 1,700 tons of DDT settled onto the seabed, where it continues to contaminate Pacific Coast waters. The E.P.A. has declared the area a Superfund site, and Ms. White is coordinating a plan to cover the most contaminated parts with a cap of sand and silt in 2012.

Posted by ctaylor on November 15, 2010 in Photography Adventures